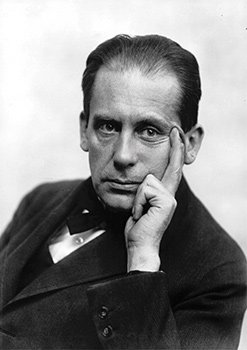 Walter Gropius (1883 – 1969) was a German architect and founder of the Bauhaus School, who, along with Ludwig Mies van der Rohe, Le Corbusier and Frank Lloyd Wright, is widely regarded as one of the pioneering masters of modern architecture. In 1922, Gropius designed his famous door handles, now considered an icon of 20th-century design and often listed as one of the most influential designs to emerge from Bauhaus.
The first Gropius handles were manufactured the same year by the bronze foundry S.A. Loevy and installed in the city theatre of Jena as well as in the “Fagus-Werke” in Alfelde. This first model still had a rounded elbow shank instead of the angled square bar shank, which was designed shortly after in 1923. In the following years, many other German bronze foundries started to manufacture Bauhaus style handles, slightly differing from the original design.
The last catalogues featuring handles with a Bauhaus design disappeared around 1939 as the Second World War started to absorb all production capacities for warfare. In the early 1980’s the interest for this timeless Bauhaus design revamped and with more flexible production technology, the range was widely extended introducing new fittings able to please contemporary fenestration requirements.

For more information please Click here and visit our technical drawing & catalogues page or fill the form below, we will reply as soon as possible.